The Knight, the Devil and Death

1. This song is not sung by MES but by Cassell Webb, wife of producer Craig Leon and a prolific musician and producer in her own right. The title comes from a 1513 engraving by Albrecht Dürer, the name of which is actually more literally translated as "The Knight, Death and the Devil" (Ritter, Tod und Teufel), but MES's version sounds better in English; less whimsical, with the final word bespeaking finality, with its single doomy syllable.

DJ Ash points out that the cover of the Ed's Babe extended single, from whence this track comes, seems to be Pascal LeGras's take on the Dürer engraving. See More Information below.

Incidentally, the mayor of Nuremberg presented Hitler with a print of Dürer's engraving at a 1933 Nazi rally.

Reformation points out that it may also be inspired by the book The Knight, Death, and the Devil, a fictionalized account of the life of Hermann Goering.

According to Hanley, the lyrics are by Craig Scanlon.

2. I do not have a copy of the version of this song that has lyrics; if Reformation's theory is correct (see note 1 above) this could be "Goering," but I cannot listen to it and check at the present time. "Goran" is a Slavic first name.

The Knight, Death and the Devil by Albrecht Dürer:

The cover of Ed's Babe: 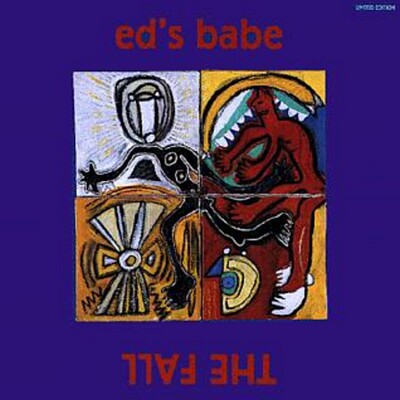 Correction: the instrumental version of this song appears on one of the Receiver Records compilations: "Sinister Waltz", I think. The version on the "Ed's Babe" single has vocals.

The version with lyrics is also on the Listening In compilation.

it does sound like Goering rather than Goran, to me. I'm not sure "qualifies" is right, either, but it's hard to make out.

"Usurper" sounds kind of more like "Zip it", but I dunno.

I can confirm: vocals present on Listening In and Ed's Babe. Instrumental on Sinister Waltz.

At the Louder Than Words festival, 2013, Steve Hanley confirms that this is a Craig Scanlon lyric.
https://youtu.be/TDk8WX-ynPk

Doesn't Bergmann's The Seventh Seal feature a Knight and Death and possibly also a devil?

Comment #6 - I don't think there's anyone who plays the devil in the movie, although Satan (or references to Satan) is/are clearly part of the story. Given theories about this song have tended to coalesce around the Dürer/Goering angle, it's worth noting alternatives.

The Pascal LeGras cover art seems very much like his take on the Durer engraving.

Actually now that I look closer I'm not as confident there's a connection, but I chunked it in More Information for the People to decide.

Mm, even allowing for the abstracted nature of Le Gras' art, there appears to be no Durer similarity at all.

Yeah I thought so at first but I'm myopic, when I blew it up I didn't see a resemblance.

On the episode of the Hanley brothers' Oh! Brother podcast with Steve Pringle, Steve Hanley confirms that this song was titled and written by Craig Scanlon.